Software Engineer vs Web Developer: What are the Differences? 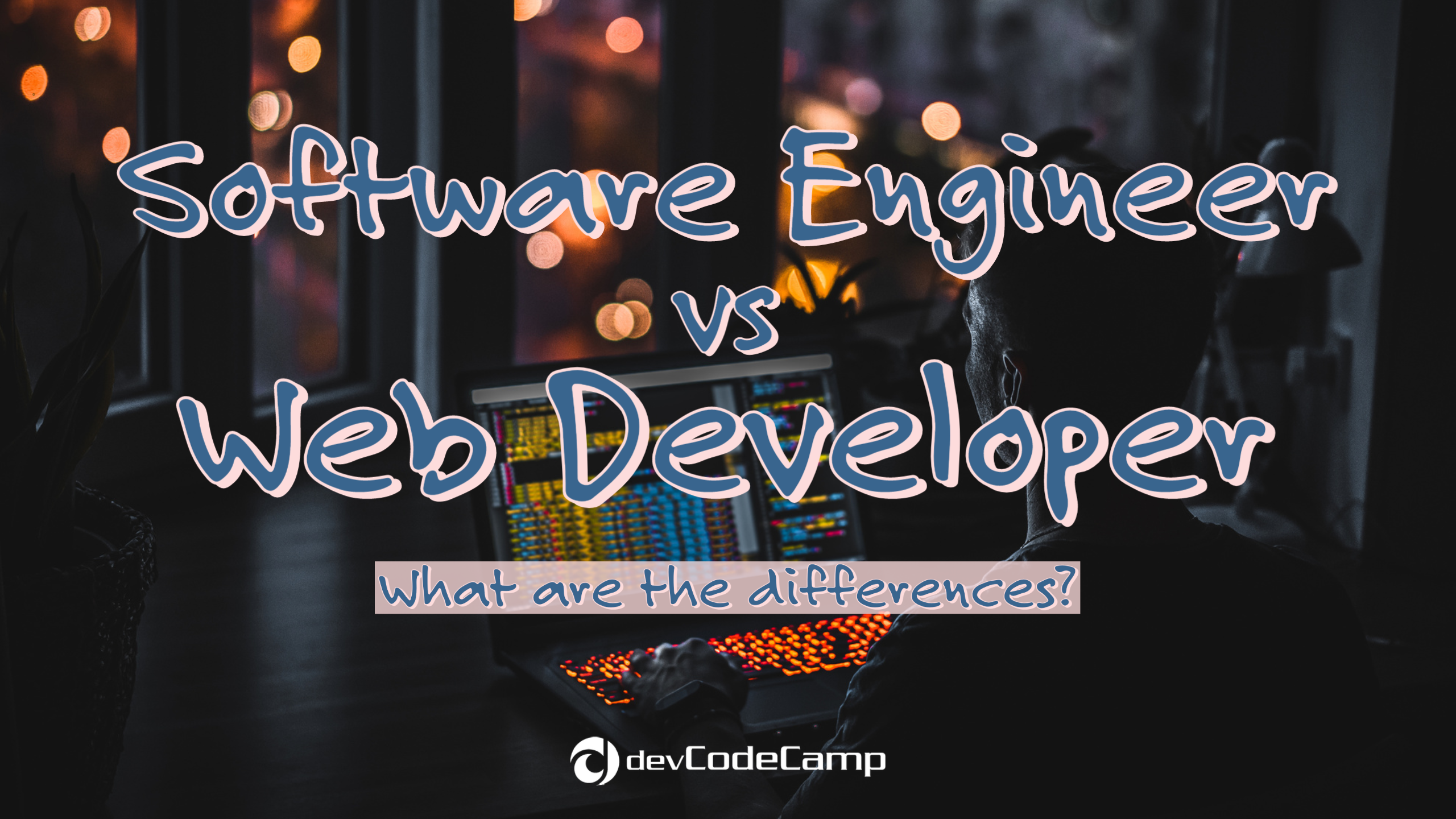 Coding looks a lot different than it did even a few years ago. With new technology constantly coming out and new programming languages being released or advanced, the coding underbelly of it all naturally jumps up that next peg in order to keep up. New job titles in the development field sometimes spawn from these coding advancements. Some more commonly known than others. Known to the general public as simply “developers”, inside the coding community it becomes a bit more detailed than that. There are Frontend Developers, Backend Developers, Full Stack Developers, Desktop Developers, Web Developers, Game Developers, Mobile Developers, Security Developers, DevOps Developers, Data Scientist...just to name a few.

Two of the more common roles in the line of work are Software Engineers and Web Developers. On an average day job searching for tech jobs, these roles are very likely to cross your screen more than others. But with so many roles being experts in specifics things, sometimes confusion can easily follow if you aren’t completely up to speed on the diversities found in a single department.  In this blog post, we will discuss the key differences between Software Engineers and Web Developers to leave you walking away more confident in each roles’ main duties. Of course, one of the most exciting parts of being a Developer is the unpredicted nature of the job. Even though we discuss each role in detail, always assume there’s plenty of additional day-to-day to-do's that may be looked over in this post. We touch on the main points you need to know. But if we were to list out each and every action a Software Engineer and Web Developer does, this guide would quickly go from blog post to book length before we realized.

What do Software Engineers do?

In one of our recent blog post releases, we spoke on the creation of the Software Engineer role. Even though the level of technology being worked on may far surpass the era where the phrase was originally coined, the role’s main tasks are relatively the same.

A Software Engineer’s main focal point is – you guessed it – software. Specifically, being the masterminds behind-the-scenes of programs, games, operating systems, and general software products. They act as software code janitors tasked to clean up and maintain the longevity of existing software, work on collaborating teams to develop future software groundwork and coding execution, and tests key points of the code to sustain long-term usability.

What is a Software Engineers Salary and Demand?

According to statistics gathered by the U.S. Bureau of Labor, the median pay for Software Developers (as of 2020) was $110,140 per year. When it comes to the demand, it’s on par with any development role in recent time. Based off the same statistics, there was 1.8 million Software Engineers, with a projected growth estimate of 22% over the course of the next eight years.

What do Web Developers do?

Web Developers are broken into frontend and backend categories. Experienced coders may have the technical ability to serve as both frontend and backend, but there’s also a plenty of Web Developers who just have a singular focus they perform. Anything that involves frontend services is directly what the visitors of the website or web application see and interactive with. It mostly focuses on the visualization of data. Backend Web Developers are almost fully technical related tasks, heavily focused on data that gets “passed” to the frontend.

Both sides of Web Development need to work in a rhythm that matches one another's needs and wants. Especially during the initial starting creation process where the code is being built out for the first time.

What is a Web Developers Salary and Demand?

According to statistics gathered by the U.S. Bureau of Labor, the median pay for Web Developers (as of 2020) was $77,200+ per year. Much like Software Engineers (and the tech industry as a whole,) the role shows no signs of slowing down anywhere in the near future. According to the same statistics in 2020, the number of Web Developer jobs came in at 199,000+ and projects a 13% job increase over the next eight years.

What are the Benefits of Being a Software Engineer and Web Developer?

Being directly involved in such a fast paced and exciting industry offers plenty of extra perks when comparing the roles offered across the board to other industry options. For Software Engineers and Web Developers, the perks may include:

Along with these, the tech industry is known for offering fresh cultures and exciting atmospheres for workspaces. Stopping by the arcade or gym before heading fully in to your desk may not seem too unusual one day in your near future. The industry is also very accepting as a whole for remote workers.

How Can you Become a Developer?

Traditional four-year college degrees are able to be acquired in both Software Engineer and Web Development. But in recent time, coding bootcamps have challenged what higher education programs are able to do in jumpstarting careers. At devCodeCamp, we are able to transform students to be job ready as developers in as short as 12-weeks.

Our online coding bootcamp lessons are built from the ground up to maximize your success long-term by giving you relevant job skills as a developer without having to wait the traditional four years.

If you are ready to start your career in code or learn more about our online code bootcamp courses, reach out!

In today’s online landscape, it’s incredibly easy to turn your hobbies and interest into a side...