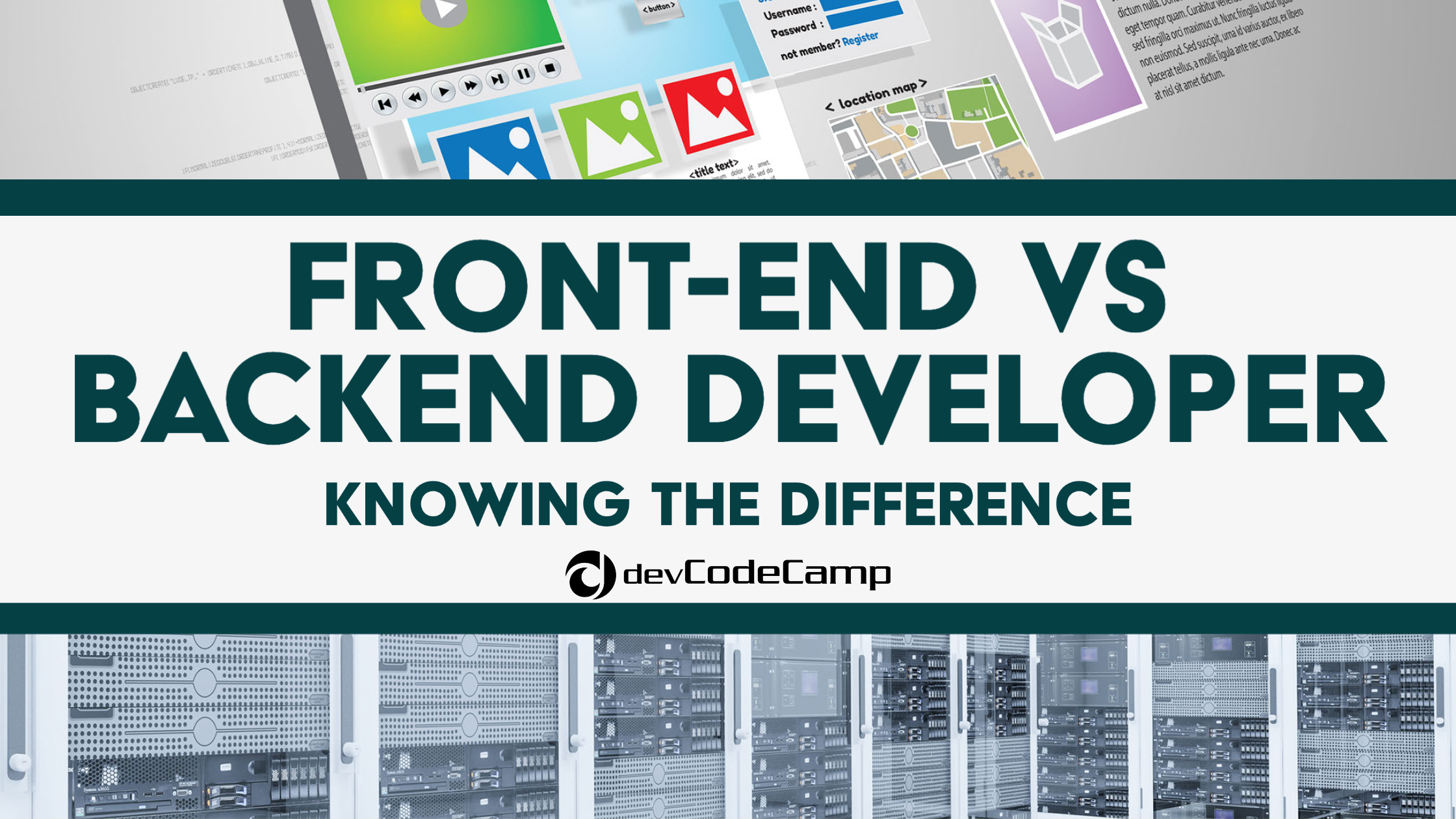 As coding progresses to new heights alongside technological advancements, new roles begin to form to focus on new areas that may have not existed or needed a full-time developer only a few years ago. It was only six decades ago the term “software engineer” was coined for the first time. Now on coding teams, you may find an upward of fifteen (or more) different types of developers working together. The industry is moving quickly and so are the development teams behind it.

If you are new to code and find each role in a coding department a bit overwhelming to understand based off only the job titles...don’t fret. That’s completely normal for beginners. Even though larger teams may have many different types of developers working on the same product, there’s a few main titles that you are likely to see more times than not. Two of the most common being “front-end developer” and “backend developer.” Use this blog as your starting point to dive into what exactly those two titles mean to better understand the biggest differences and priorities are for front-end developers vs backend developers while gaining more knowledge into why they are so important in code!

What is a Front-end Developer?

A front-end developer’s main focus is the client-side development of a website. They are responsible for creating visually appealing user experiences with clean and easy to use functionality. Everything you interact with or see when visiting any website online, was likely created by a front-end developer.

Along with making sure the website’s appearance and functionality is using industry best practices, they also do a number of things that a visitor may not see in plain sight while viewing.

Some main tasks Front-end developers are responsible for:

What Types of Technologies Do Front-end Developers Use?

Additionally, front-end developers take advantage of the extensive frameworks and libraries available to them to take their code to the next level of possibilities. Using tools like React, Bootstrap, and jQuery to lean into that coding groundwork that HTML, CSS, or JavaScript laid during the website’s creation and create exciting new outcomes.

Why Become a Front-end Developer in 2022?

The role and duties of front-end developers are extremely relevant in modern day tech. Companies of all sizes hire front-end developers to create, maintain, and progress their overall website and user experiences full-time. According to siteefy, there are over 250,000 websites created daily. Having the proper skillset to make a website visually pleasing and optimized gives you a large upper hand in such a fast-growing industry. If you are interested in having a career in code as a front-end developer, statistics show the median pay for front-end developers in the United States is $119,224. There’s also plenty of opportunities available to freelance your work and turn your skills into dollar bills as a steady side income.

What is a Backend Developer?

The backend developer plays an important role in any application or website by managing the mass data exchanged between the user and server. The backend developers usually work closely with the front-end developers on teams to make sure that the codes are linked together for the best experience for the user and also the company behind the scenes. They primarily directly oversee the server and databases constantly (and quietly) running in the background of every website or application you use.

The responsibilities of a backend developer include:

What Types of Technologies Do Backend Developers Use?

But those are only the three most commonly used. Backend developers usually have a wide range of knowledge into multiple programming languages and frameworks to maximize their server capabilities. Additionally, backend developers often use C# for client applications, Java for lesser implementation dependencies, and Ruby for easily creating web applications.

Why Become a Backend Developer in 2022?

Similar to front-end developers, the industry demands are showing no signs of slowing down. Managing databases of all sizes requires a specific set of skills that companies are usually very quick to add to their teams since so much depends on how strong a website or application server is run. Salary statics show that backend developers make an average of up to $116,000 a year. And with so many skillsets naturally attached to the job responsibilities, finding a specific role dedicated to being an expert in only one of the main programming languages or frameworks used daily by backend developers is highly likely, as well.

With the industry trends and astronomical statistics mentioned throughout this blog post, it’s easy to understand why becoming a professional front-end developer or backend developer could be a very realistic career opportunity for anyone interested in technology and code. But getting the long list of skills required for each role may not come as easy. With so many options to pursue in learning, choosing the best one for you may present unexpected challenges. Luckily, devCodeCamp has been that answer for hundreds of working developers in the industry today. Our graduates can be found in companies such as Amazon, Facebook, IBM, HubSpot, Deloitte, and much more. Our focus is turning that interest in code into a professional developer. All in just a few weeks!

Reach out today if you want to better understand how our online coding bootcamp courses give relevant and hirable skills to hopeful adult students interested in launching a career as a front-end or backend developer.

Much like the recently discussed Python language, JavaScript has become one of the most used and...

We’ve recently dived into a number of programming languages in our “Decoding the Code” blog series...

How to Pick the Right Programming Language to Learn

So, you have an interest in...