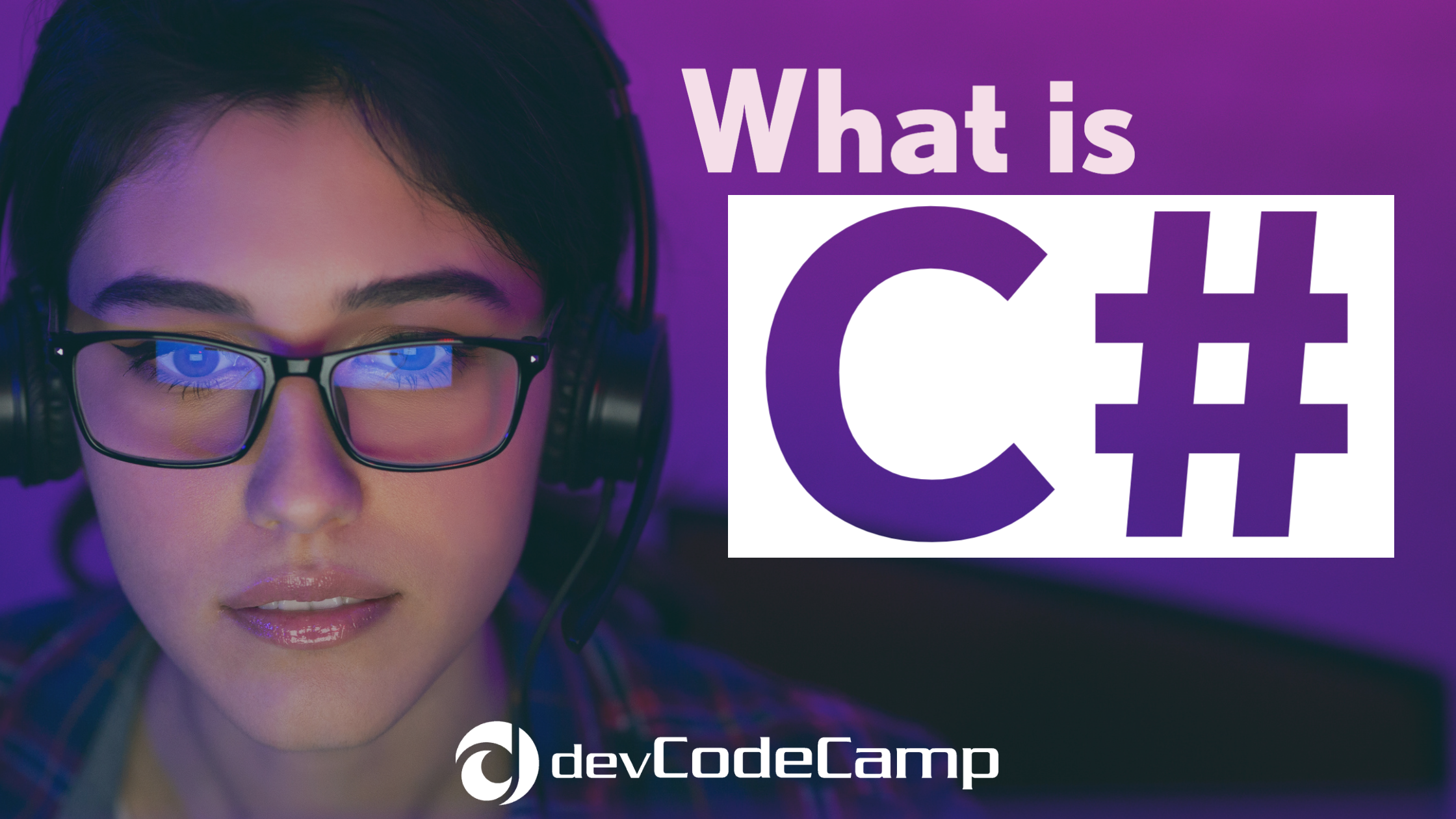 If you are just easing your way into the world of programming, it could come across as a bit overwhelming with so many languages available to choose from when learning how to code as a hobby, hopeful career, or narrowing down the lengthy list of options to help you build out a specific idea. In this devCodeCamp blog series, “Decoding the Code,” we are giving you a breakdown of today’s top coding languages to help that uncertainty turn into an expertise. In our most recent addition to the series, we’ve taken a look into Java, JavaScript, and Python. In this blog post, we will breakdown another top coding language in the modern tech landscape – C# (C-Sharp) discussing how it started, what it’s used for, the importance of C# in 2022, and how to learn it.

What is the Programming Language C#?

In the early to mid-1990’s, Java completely dominated the programming space as it was regarded as one of the most used coding languages in the world. As Microsoft rose to dominance by the end of the same decade, they set out to change that. At the start of 1999, Microsoft formed the “Cool” (C-like Object Oriented Language) team under the leadership of the talented developer Anders Hejlsberg. The main objective of this team being formed was to create a programming language specifically for Microsoft to have complete control over and make exclusive to their products. Hejlsberg and the Cool team instantly got to work and by the next year, C# was officially revealed to the public and was released with Microsoft’s groundbreaking Visual Studio

But it wasn’t a clear path to success instantly. Java creator James Gosling voiced his opinion a few years after the Microsoft announcement stating C# was simply just an “imitation” of Java. And for the most part, it was a legitimate observation that many programmers acknowledged. By the time C# version 2.0 was released in 2005, it proved the true potential of the coding language and left those wide opinions across developer communities in the dust. Separating itself from being a simple Microsoft Java clone, to being a standout programming language still used today.

What is C# Used For?

C# is a general-purpose programming language. Because of that, the capabilities are all across the board on what developers are able to use it for. Even though it would be challenging to pinpoint every piece of software C# has had a direct hand in helping create behind-the-scenes, the language is mainly used in three categories.

Some programming languages are far from being beginner friendly. C# is notably very easy to learn in comparison. C# is statically typed and has user friendly features that assist in your coding sessions to enable you to focus on the creation process and not be distracted by too much digital noise filling up your screen. This powerful programming language allows developers at any skillset level to accomplish what they need to quickly and easily.

C# is easy to maintain

With a programming language that has been around for twenty years, you may assume going back to reviewing your old C# code could become a long night of deciphering fueled by online searches. But that is far from the case. Even though the language has seen many updates in the last two decades, one thing has remained consistent: the actual code.

With Microsoft teams continuing to support the programming language, C# may receive upgrades around the edges but has stayed the same at its core. This allows for code written many years ago to easily live longer lifespans if needing to revisit or update.

C# has a strong community

With a programming language being released by Microsoft over 20+ years, C# has become embedded in modern day code with a strong (and massive) community attached to it. Programmer communities can be found all across the globe, virtually and physically, who have a passion for C# and are experts in all aspects. This is particularly great news for new developers breaking into the industry who will have access to direct support in programming groups or online help. But it’s also a win for seasoned developers, too. Being able to have their fingers directly on the pulse of C# allows for coders to not only look forward to what may be coming in the update pipeline, but to also share and discuss the full potential of what the code is capable of. While in turn offering challenges or ideas as a result.

How to learn C#

According to a 2021 statistic, 27% of all developers use C#. Placing it one of the top ten most used programming languages in technology today. That percentage is a direct representation of what the demand looks like for developers who are knowledgeable in C#. With a constant demand in the industry for developers bringing new and exciting talent to teams, there hasn’t been a better time to start learning how to code and have C# be in your coding tool belt.

At devCodeCamp’s online coding bootcamp, we take hopeful adults with limited coding knowledge and teach them relevant and hirable skillsets in order to thrive in today’s technology world. Our graduates can be found working for massive tech companies such as Amazon, Facebook, HubSpot, IBM, Deloitte, and much more. Learn how to code in only a few weeks and obtain the knowledge you need to launch a career in code through the devCodeCamp difference. Reach out today to see how.

The number of programming languages to ever exist is a staggering high number of 8,945. If you are...