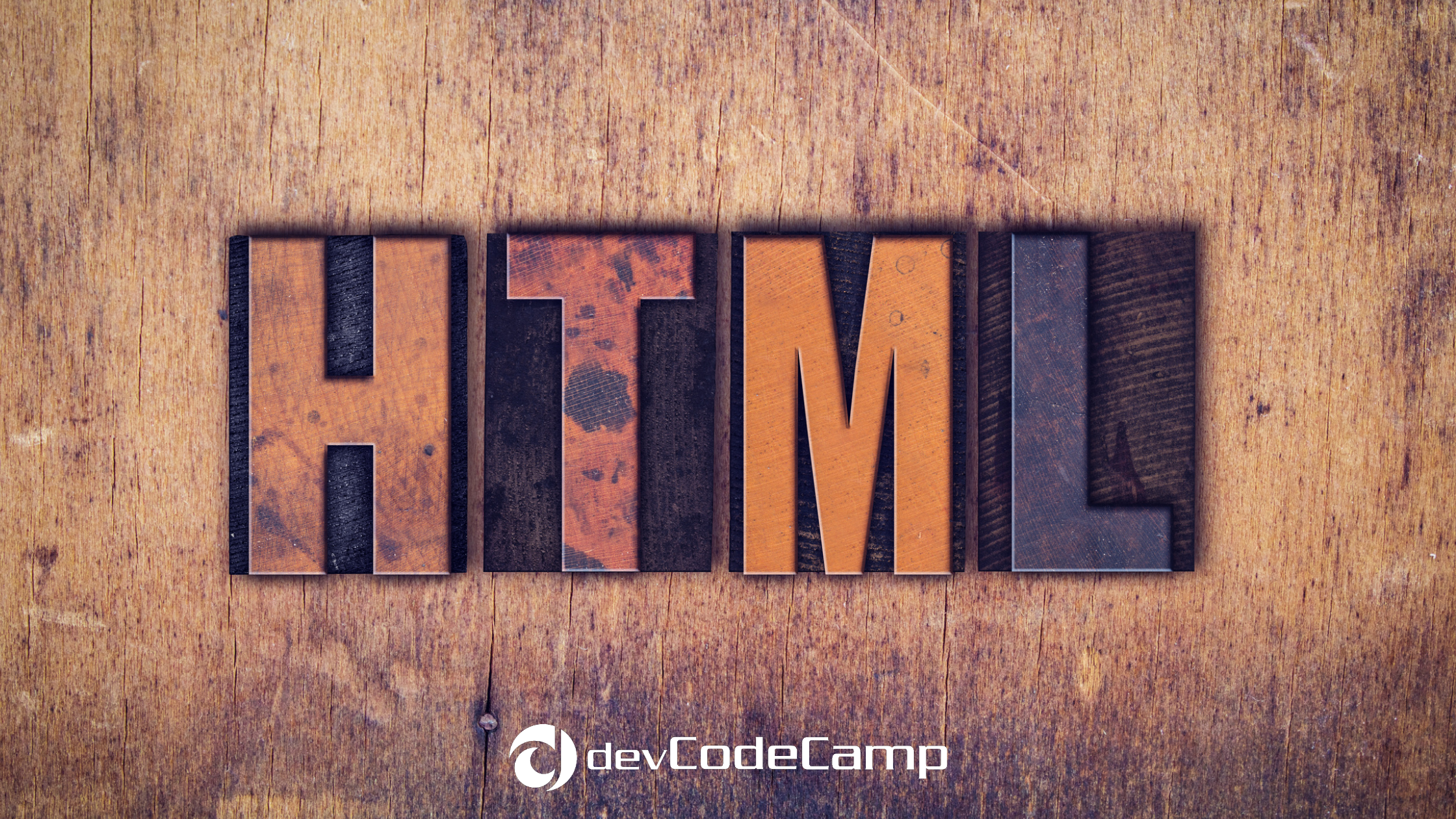 The number of programming languages to ever exist is a staggering high number of 8,945. If you are someone who has interest in becoming a developer but not sure where to start, that number isn’t going to calm your inner desires down very well. Even though the number of languages used in today's modern tech is only a percentage of that amount, it can still be overwhelming knowing where to even begin when wanting to pursue learning how to code. Recently devCodeCamp has launched our “Decoding the Code” blog series diving into some major programming languages that are some of the most popular across teams of developers today. So far, we’ve highlighted the main uses in 2022 for Python, JavaScript, Java, and C#. All to make you more equipped with detailed knowledge of the coding industry.

As we continue this blog series, we’ve made our way to HTML. This is a name you’ve likely seen somewhere in your life online because of how widely used it has been for the last few decades of the internet. To most, HTML is not considered a traditional programming language because its main functions are simply creating a web framework to house the actual programming languages inside it. HTML is officially considered a “markup language.” Which means the main focus is to format and structure. Compared to a programming language defined as the rules of your script that is the driving force behind the actual output. Even though HTML is not exactly clumped in with the other programming languages we’ve recently discussed, it’s still a relevant piece of code that is used by 94.6% of all websites today (with 90.7% of all websites using HTML5, according to the same article. But more on that later.)

Let’s take a look into the history of HTML, what HTML is used for today, why you should learn HTML in 2022, and how to learn HTML.

In 1993, Sir Tim Berners-Lee, who also invented the World Wide Web, wrote the first version of HTML. The piece of code was originally called “HTML Tags” to closely reference the elements and tags that were the backbone of it. Berners-Lee found inspiration for HTML through the then-common SGML (Standard Generalized Mark-up Language) which was considered the standard for transforming basic text into more structured formatting such as paragraphs and headings. Because Berners-Lee is responsible for the World Wide Web, the integration of hyperlink tags put HTML on the digital map very quickly. Through many version updates, it evolved into HTML 4.01, which became the groundwork for most websites in the 2000’s and onward.

Today, the markup language’s latest version, HTML5, is most commonly paired with JavaScript and CSS to continue creating the structured elements of most websites you visit today. Including this one.

What is HTML Used For?

Simply put, the functions of HTML are to structure a website. Using basic HTML element tags, developers are able to transform plain text into more specifically styled content. Using common opening and closing HTML tags such as “<h1></h1>” will take a basic heading text and make it stand out like you wished for it to with larger lettering compared to the others nearby. So far on this very page, the HTML tags are behind each section’s title size, the hyperlinks, the paragraphs, and in just a few seconds the list that follows.

Web developers use HTML for:

If you are interested in learning how to create websites for personal interest or a professional pursuit in code, learning HTML can be looked at as a requirement in many ways. Front-end developers use HTML daily when creating or working on projects of any size. It is often considered the starting point of the website’s code and is needed to build off of other advanced programming languages and their libraries.

There is a reported 10,500 new websites created every hour. Which means the demand for these knowledgeable front-end developers is constant. Learning HTML in 2022 allows for a large pool of job opportunities as a full-time professional and also a legitimate way to earn a steady side gig. With the demand for developers across the board in the industry and the ability for anyone to have their website hosted in minutes, it’s safe to say learning HTML is an absolute must.

How to Learn HTML

Because of the basicness behind its initial design, HTML is usually considered a great starting point for hopeful developers wanting to learn how to code. The structured tags that HTML uses are easier to memorize and put in use compared to other more complex languages web developers use daily. But as someone attempting to break into web design, you have to learn how to crawl with HTML before you are able to run with CSS -- metaphorical speaking.

There are plenty of options online that can give you the knowledge of how to begin with HTML. But a much more limited number of options allow you to not only learn the basics of HTML, but the entire package of skills it takes to launch a career in code as a front-end developer. All in the same course. At devCodeCamp, we take interested adults wanting to pursue a higher education option to learn coding and give them every piece they need in order to launch a career in only a handful of weeks. What may sound too good to be true on the surface, delivers proven results every month through our graduates who can be found inside of major top tech such as Amazon, Facebook, HubSpot, IBM, Deloitte, JPMorgan Chase, and much more.

If you are ready to get the skills it takes to become a professional developer, devCodeCamp’s online coding bootcamp is what you’re looking for. Reach out now to learn more.

If you ever heard of the term full-stack developer but wasn’t quite sure what full-stack...
END_OF_DOCUMENT_TOKEN_TO_BE_REPLACED
ManoByte

If you are just easing your way into the world of programming, it could come across as a bit...