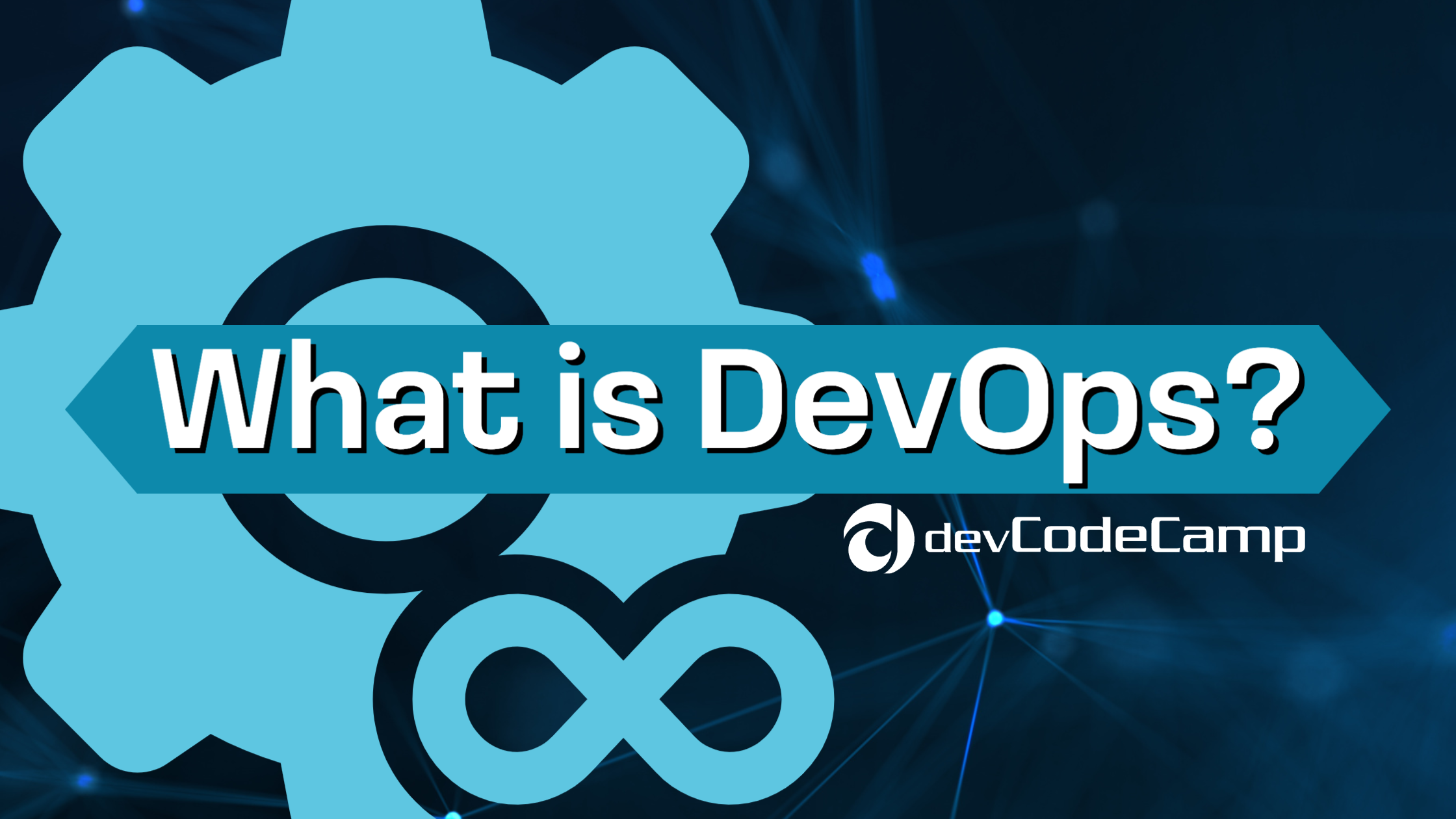 In devCodeCamp’s ongoing blog series, “Decoding the Code,” we’ve taken a look into some of the most used programming languages in technology today. Even if coding is obviously the number one focus on any development team, developers use more than just programming languages to help their ideas come to life and assist in hitting goals. One of the things helping teams of all sizes is an approach that has skyrocketed in popularity during the last decades of code – DevOps. Even though DevOps is not a programming language, it’s still a widely used team structure that can be found in many technology companies today to promote productivity, collaboration, and faster turnaround time on work. In this blog post, let’s discuss what exactly DevOps means to better understand why so many top tech companies are leaning into the approach.

The term DevOps was first officially used in 2009 by a Belgian consultant named Patrick Debois. Debois created a conference named devopsdays to assist IT teams in improving their overall productivity. The name stuck. But you will have to turn back the clocks sixteen years to find the first instance of DevOps described.

In 1992, the Telecommunications Information Networking Architecture Consortium (TINA-C) was created in New Jersey to bring together around forty telecommunications operators, telecommunications equipment and computer manufacturers. TINA-C's main goal was to combine the years of knowledge and success of these forty industry allies to raise the bar in the telecommunication infrastructure. From these conversations came the definition for the Model of a Service Lifecycle where software development and telecom operations were combined together. This gave the first glimpse into what DevOps would shift into for tech teams years later.

Since the first devopsdays event held in 2009, it has now grown into being a worldwide conference that is available to many countries where technology companies and programmers are widely present.

What is DevOps Used For?

So now you know how it got started. Let’s discuss why it has become so popular in such a relatively short time.

The term DevOps is a combination of two words: development and operations -- which is exactly what DevOps is. The combination of two teams into a single thriving beehive system. This combination may sound simple on the surface, but it wasn’t until technology teams started to try it out for the first time to see the positive results instantly.

Traditionally, development teams and operation teams were two separate instances. Even if they worked side-by-side in the workflow, they were still separated by being two defined teams. The development team would spend the time creating code while the operations team would have the task of offering feedback on the work. Because of how quickly things move in most tech companies, this system showed obvious flaws in communication and execution. While the development team would jump from project to project, they would have to take their focus off of immediate priorities to revisit work from potentially weeks in the past sent back from the operations team. This slowed down processes across the board tremendously.

With DevOps, companies are able to join the forces of development and operations to become the same team working as a cohesive unit. This makes communication stronger, deployments quicker, and the product quality better. Allowing everyone to be on the same page at the same time.

DevOps is quickly shaping into an industry standard practice. In a 2021 survey, 74% of companies have implemented DevOps in some form. The exponential growth in such a short time can be attributed to many things. But the number one would most likely be the proven results. DevOps in tech works wonders for product end results and there’s no way around that. As large companies become more on board with combining teams, smaller companies are following in inspiration.

A few major technology companies that use DevOps:

With DevOps shaping into a new normal and so many big tech companies taking advantage of the benefits, learning the proper skills to be on these teams is highly sought after. In the years to come, based off current growth rates, it’s easy to assume that even more roles will become available and created working directly on the DevOps side of house. Getting in now would be a career investment that would surely set you up for success for many years to come.

How to Learn DevOps

The technical side of DevOps is a bit more detailed than the basic definition of what it is. To be considered for a role on one of these teams, you need to come prepared with the proper skillsets. At devCodeCamp’s online coding bootcamp, we understand the value of making sure students get the opportunity to maximize their success by learning DevOps in select courses. Learning the necessary processes will give you the knowledge you need to confidentially pursue new and exciting career opportunities.

Reach out now if you would like to learn more about the DevOps training we offer in our online coding bootcamp. Our graduates can be found working in tech companies such as Amazon, Facebook, Oracle, IBM, Deloitte, and much more. It’s time to get the skills you need to launch your career in code. Let’s show you the devCodeCamp difference.

How devCodeCamp’s Coding Bootcamp is Built for Your Success

In the last decade, coding...

We’ve recently dived into a number of programming languages in our “Decoding the Code” blog series...