What are Code Bootcamps? 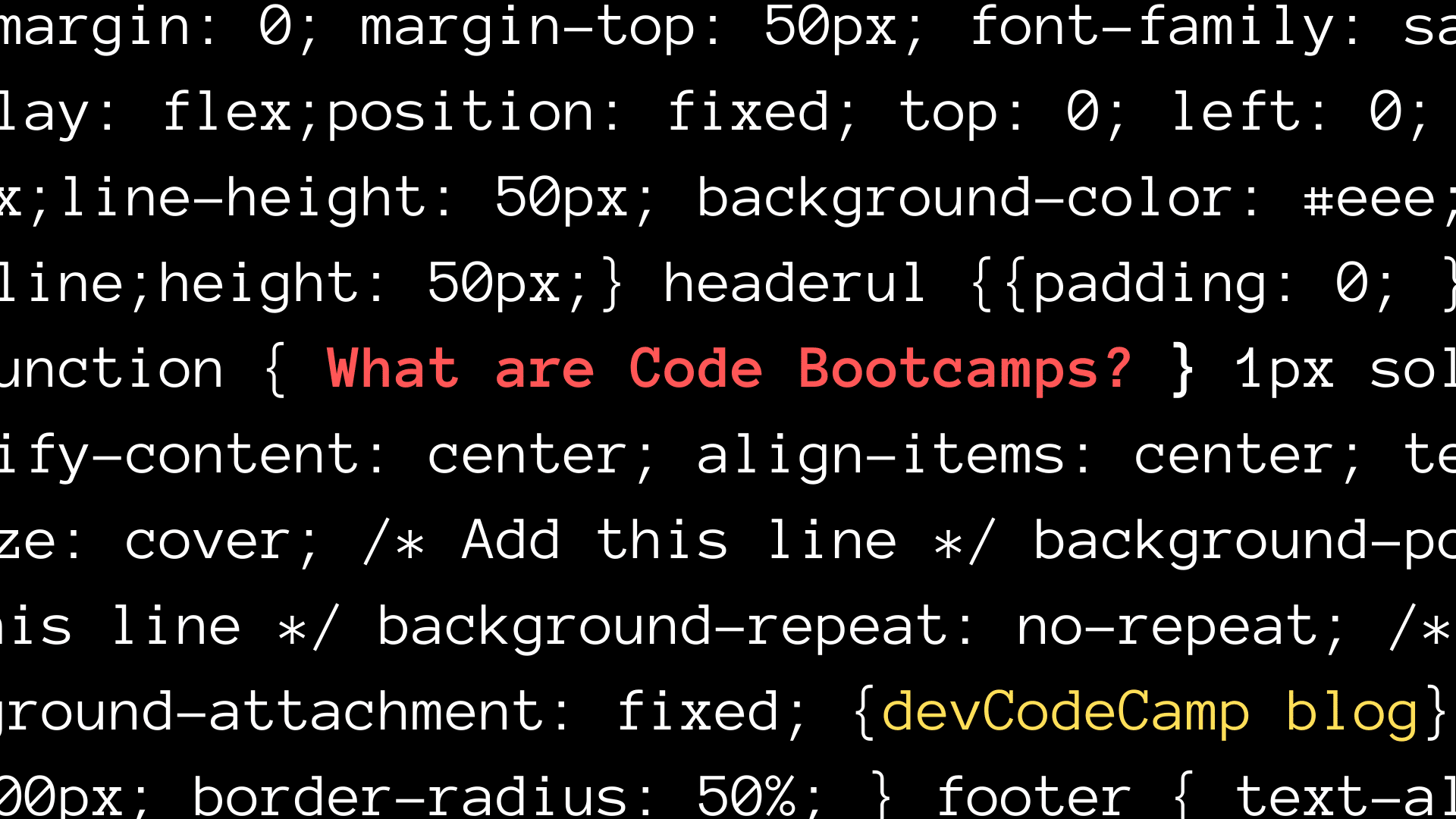 Conversations surrounding a higher education has always been a stressful topic. The big question of “what’s next” plagues most students’ minds as they slowly reach the end of their high school careers. Similar feelings are shared for adults who are ready to advance their career and skillsets. The stress that is naturally attached to such a large decision makes total sense with something that can potentially determine the next decades of your life. In modern day, that life altering question has some attachments to it. It’s no longer just “what’s next”, but has evolved into “what’s next and how?” for anyone seeking those higher education options in today’s high-tech landscape. Traditionally, the first (and for some – only) pick would be getting a degree at a 4-year college. But in recent years, numbers reveal that people are starting to pursue their options more closely aligned to their field.

When it comes to the world of code, the numbers are absolutely staggering. Reports show in 2019, 33,959 students graduated from a coding bootcamp. As this exciting new way to learn becomes the new normal, there’s still plenty left scratching their heads wondering what that term exactly even means. Here at devCodeCamp, we had a difficult time thinking of someone better to explain what this thriving new learning alternative actually is in detail. By the time you reach the end of this blog post, we hope you come out an expert on all things bootcamp!

What Are Coding Bootcamps?

In 2011, the term “code bootcamp” began sweeping internet forums and local tech communities around the globe. Fast forward a handful of years later and you can hear President Obama speaking about the benefits of these programs. The thing that changed in such a short time? The results! As these programs became more mainstream, more hopeful students and hobbyist were able to find options for them that allowed them to participate in bootcamps firsthand. They were able to enter these classes on a beginner level and walk away only a few months later with the same coding knowledge as a 4-year college graduate.

An educational shift spawned from these experiences. Once graduated, these now Junior Developers were landing full-time careers in top tech companies. It was the very proof in the system that allowed a step back for many when presented with their “what’s next and how” question. The knowledge and skillset these students were obtaining was the very thing to go head-to-head with the traditional 4-year college degree formula. But the experience going into these roles weren’t the only thing they were able to take advantage of. With the national average developer salary of $110,000, these new coders can find success and take their career to new levels. With the evidence of what bootcamps were able to do, it was able to kick the industry into overdrive and give future students the option to have a higher education with a sought-after skillset in a fraction of the time. It’s not only appealing, the method simply works.

The technology demand currently happening around the world shouldn’t come across as a surprise. At any given time, most of us are surrounded by some piece of technology. With that trend showing no signs of slowing down.

The number of devices connected to the internet in 2020 hit 8.74 billion with a forecast predication of more than 25.4 billion in 2030. Every device, and product that lives on them, have lines of code running through its virtual veins. But these lines of code aren’t being written by themselves. There are individuals building it all from the ground up. And with the nonstop rise of technology coming out every day, comes an obvious demand for the coders behind them. That global demand in developer population expecting to hit a colossal 27.7 million in 2023. With these numbers steadily becoming larger across the board, there’s statistically never been a better time in history to launch your career in code than right now. With the current device count predictions, it proves that the skillset will be needed for an extremely long time. It’s almost safe to say forever. Talk about some serious job security.

Why Should You Do a Code Bootcamp vs 4-Year College?

As years go by, the numbers for developer coding bootcamps show the interest is still there from those seeking higher education. And as more students graduate and end up in these high paying tech jobs, it’s obvious why that interest is still alive and well with these programs. The time-frame difference is appealing to most. Being able to learn the exact same skillset in a slither of the original time. It’s a shortcut away from a 4-year degree to get the same place more than three years ahead of others.

Along with the option becoming more known over the years, programs have been able to grow and adapt with those needed changes. Offering part-time bootcamp courses for those who need to work around other priorities in their day-to-day. Due to the last few years’ world events, online coding bootcamps have also been able to grow their courses out to be completely remote. Offering students from all over the country options to join, regardless of if they are close to the physical location or not.

Even though coding bootcamps have only been present for the last decade, they have become a permanent staple in conversations of higher education in the technology industry. Being able to become a Junior Developer in 14-weeks, saves not only time – but money. It also offers more than tech skills. It tests your mental sharpness all around. Bootcamps don’t only get you career ready, but can have positive effects on other parts of your life. One of our past articles, “Coding is an Art”, explains it perfectly: “When you are building applications, you’re building something beautiful that other people can really appreciate. And ultimately, I feel like that’s what art is. And it’s also a way for developers to express themselves through their applications.” Becoming a developer gives you the creative reward of creating things to help make lives better, easier, quicker, more fun, and smarter. It’s a fulfilling experience that simply just comes along as an extra perk. You stack the other benefits on top of it, and it’s a clear understanding why so many are making that jump from 4-year degrees to better their lives in a fraction of the time.

DevCodeCamp is an award-winning coding bootcamp for a reason. We stand by the benefits of what these programs can do and have crafted every course specifically for your needs. Let us know if you would like more information on how we do that. We have new courses starting constantly. A few simple conversations could get you started on your 14-week journey to kickstart your development career sooner than you may think.

5 Things You Should Have Before Applying to devCodeCamp

Here are the five traits we look for.

If you're thinking about applying...

An Interview with Alumni Josh Grimaldi