Coding a Decade Ago: A Look Back (and Forward) 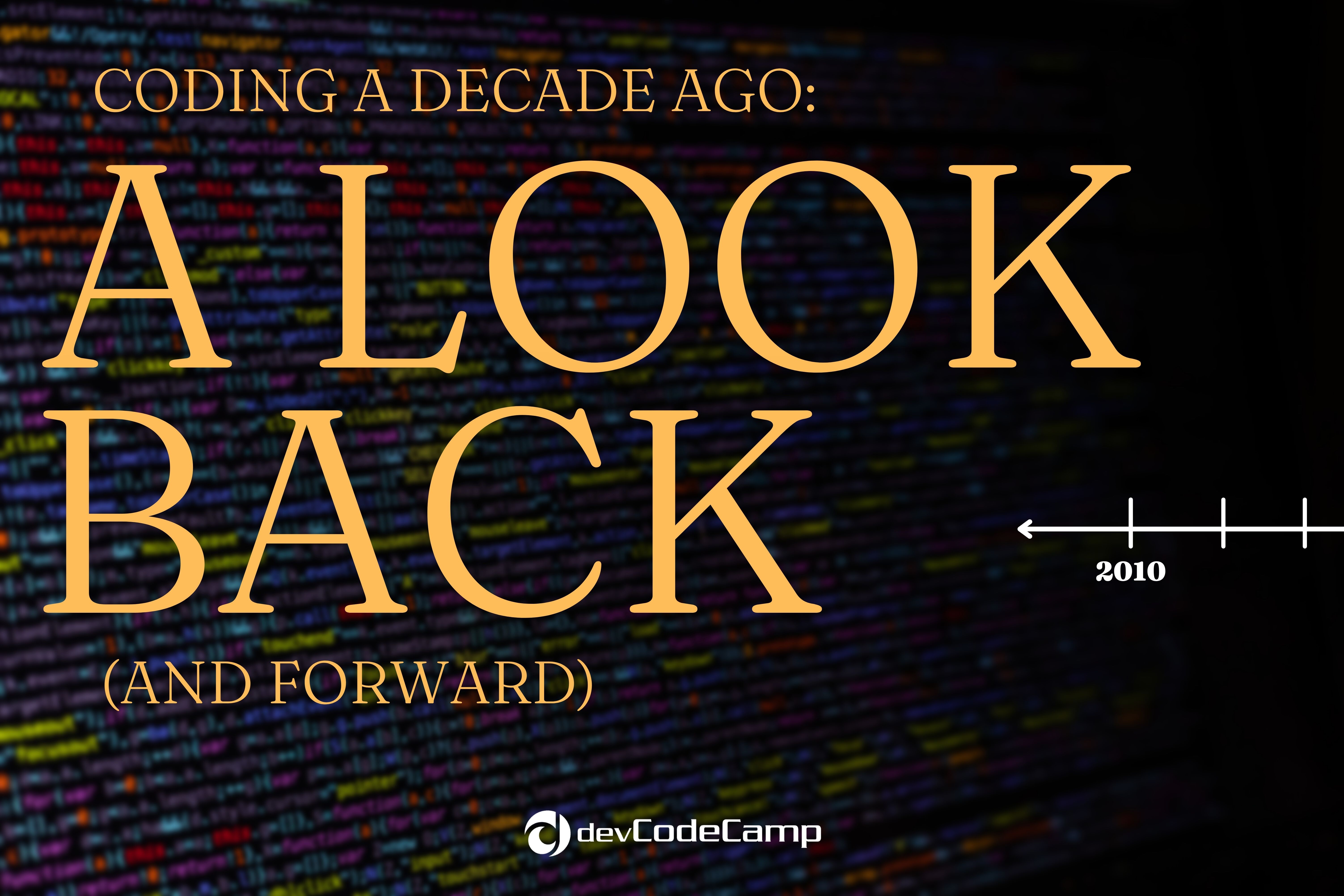 The history of coding is a long story originating over one-hundred years ago. It wasn’t until the 1990’s and the introduction of the internet, where the capability limits shifted into overdrive. As more personal computers entered homes, the ability to begin programming became instantly accessible. It was an exciting time in technology history. For the first time at a large scale, anyone was able to launch a program or a website — all from their bedroom. Some of the largest companies in the world today began this way. With a computer sitting in a garage and lines of code running on its screen. It unlocked a new passion for millions and created generational wealth for many going into the new millennium.

Even though that happened only thirty years ago, to some, it may seem like a lifetime. With how fast new groundbreaking pieces of technology are being programmed and released for public access, it’s challenging to stay up-to-date with the “latest and greatest” since that title may shift to a new focal point week-by-week. Ideas are much larger with the code able to be built much stronger to make it come alive. It was only a few short decades in the past where Nintendo’s 1989 “Powerglove” hit the market for hopeful kids excited to live in the future. Now, you might be able to find virtual reality headsets in the bargain bin at your closest gadget store. Even if it’s an obscure reference, it’s proof to the point that things change. Fast.

It doesn’t take going back one-hundred years into the past to be amazed by what technology advancements have been made from the groundwork of code. Ten years ago may seem like last week for some of us. As we take a step back in this article to examine what the 2010’s programming peaks were, it may begin to put things in perspective for you on how fast advancements are occurring. But more importantly – show off the true power of a few lines of coding and intelligent programmers shaping our future as we compare to what we have today.

As we take a look back at what the “best of” looked like in coding from a decade ago, play along at home. Do you personally remember using these items and can you recall how revolutionary they were at the time?

The iconic tablet was released under Steve Job’s Apple reign which was met with a massive wave of success. In the first month of release, over one-million devices were sold.  Now a lot of this success falls under the category of Job’s legacy as an inventor. But it wasn’t a one-man job. The developers were tasked with the challenge to take the iPhone groundwork and put it on a screen size much larger. At the time, this wasn’t common practice. The team needed to become experts on this process since they were leading the charge for the next wave of world changing tech. Regardless of what potential struggles may have lived leading up to launch day — they paid off. By the end of the year, it was outpacing their Mac sales.

The Nintendo Wii console was released during the 2006 holiday season. It took the gaming industry by storm with its motion-controlled joysticks and full game releases molded around playstyles to take advantage of the new tech. Microsoft’s Xbox dev team got to work. In 2010, the Kinect for the Xbox 360 gaming console was released. It was a groundbreaking piece of technology that used the same concept behind Wii, but eliminated the need for any additional controller. Using only your voice and body movements, you were able to play a new type of game that offered a unique, absolute one-of-a-kind experience for the player. The coding team was responsible for making this ambitious tech advancement come to life. Programming the webcam to be your main focal point while in-game tracking allowed you to flair your arms and legs around acting as the controller.

App developers didn’t have a quiet year, either. With multiple notable applications launching such as Instagram, Dropbox, and Chase Mobile introducing the (now industry standard) instant check scan for deposits. In the busy year of mobile applications, Quest Visual released the  innovative translation app, Word Lens. The app allowed real-time visual translation between English and Spanish. The only thing needed was the app download and your camera facing the words needing to be translated. After automatic word recognition, the on-screen words would transform to the selected output language. Google was so impressed by this piece of software, they later fully implemented it into their Google Translate app, which is still using the technology to this day offering 100+ languages.

The World of Programming Today

Today, phenomenal pieces of technology can be found everywhere around us. With bright minded developers constantly pushing the envelope on what can be achieved.

The technology leading conversations today and “wowing” consumers all begin with lines of codes written by programmers crafting the future one line at a time.

What is the Future of Coding?

Looking back ten years ago can be an eye-opening reflection on how far we’ve come. Even though the achievements still remain relevant, seeing where we are today casts a large shadow of what the crowning tech advancements were not too long ago.

Thinking of what the next decade may hold is exciting. But the rapid growth in tech comes with a small price of demand. With how fast and largescale project have now become, having coders to meet that expectation have become a struggle in the recent past. With growth predictions on a certain constant incline, the number of developers needs to be right there with it. We asked what the future of coding may look like. And with such a high industry need, it’s thrilling to think the future might very well be – you.

Creating life changing pieces of technology doesn’t mean a super genius has to be creating that coding groundwork. When an industry begins to grow, the other things directly attached to those things do, too. Modern day accessibility for developers seeking a stronger skillset have had their options open up for them across the board. Web developer coding bootcamps have become handy for those wanting to jump into a new line of work or learn from scratch. Giving the next generation of problem solvers and inventors a kickstart in a fraction of the time compared to traditional schooling. If you aren’t interested in achieving a Junior Development skillset in as little as 14-weeks in an online coding bootcamp, then traditional college is always an opportunity to be introduced to the industry, as well.

The demand is there to hop on board now to be a part of the next biggest thing around the corner. Reach out now if you would like to hear how we can get you prepared to play a part in the future of coding.

5 Things You Should Have Before Applying to devCodeCamp

Here are the five traits we look for.

If you're thinking about applying...

Something that’s really important for students is to get that quality feedback...

Sofofiling provides a connection between someone who wants to learn something new or someone...
END_OF_DOCUMENT_TOKEN_TO_BE_REPLACED