Artificial Intelligence vs Humans in Code 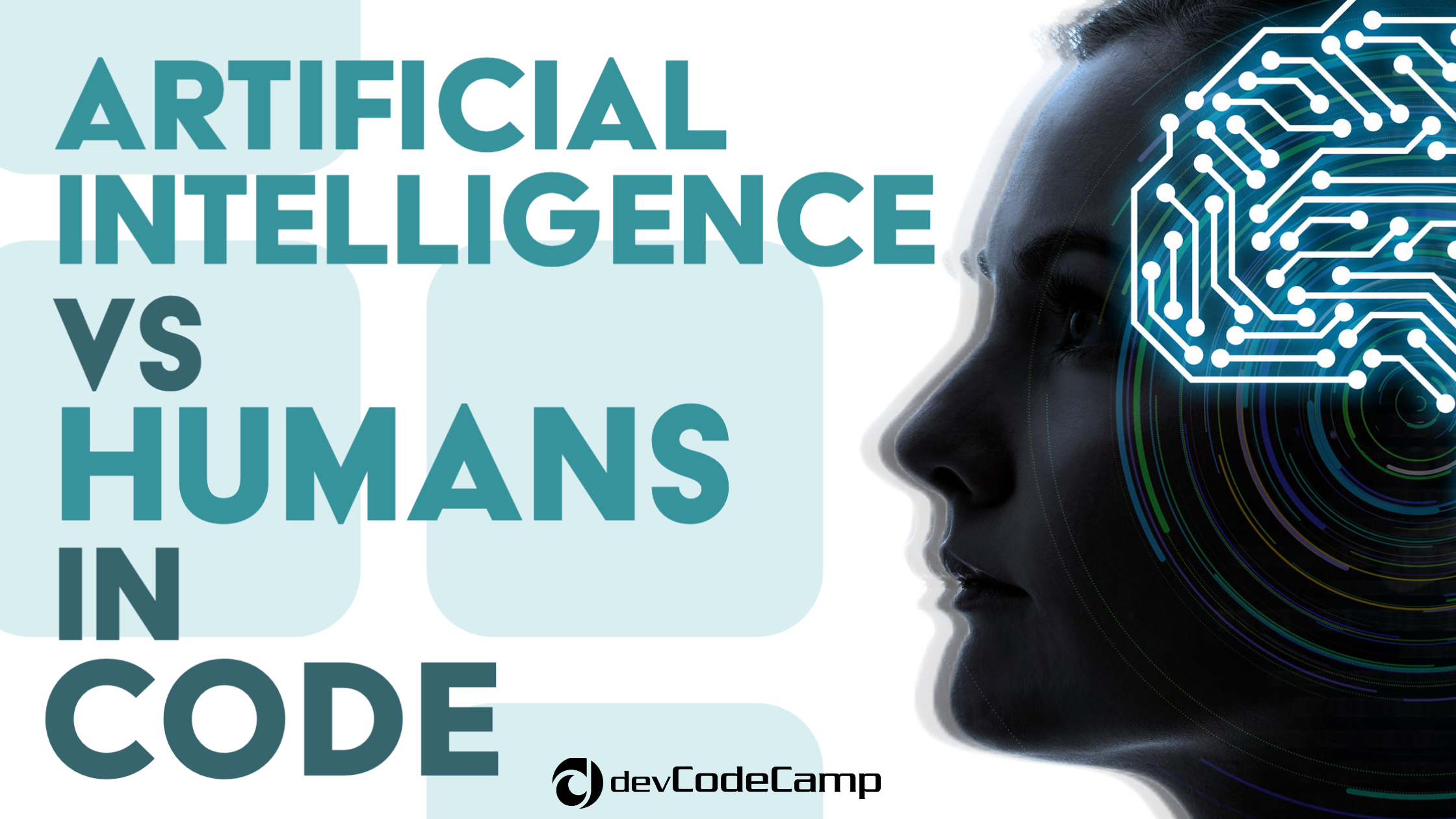 Technology advancements are usually looked at as an overall positive step forward for the world. But for some, smarter tech may cause fear and introduce a direct risk in current skillsets or careers. Stepping foot into a grocery store or a fast-food restaurant looks a lot different than it did only a decade ago. Self-checkout kiosks have slowly started to outnumber the number of physical workers in many stores to lower costs and increase transaction speeds. In coding, developers haven’t been outnumbered by its tech creations and are still on track to continue that trend based off industry demand predictions. But for some programmers, those predictions aren’t enough to be worry free when discussing artificial intelligence in code. In this blog post, we will discuss the benefits of code written by humans and how developers shouldn’t stray from the idea of artificial intelligence (AI) — but should actually lean into it.

The progression in AI could easily cause a distant worry for a current or future coder. The potential of writing code (almost) error free in only a fraction of the time it may take for a seasoned developer could make anyone be hesitant of welcoming the idea so openly in the industry. But changing that skeptical viewpoint could come with a big reward.

Introducing AI into your current toolbox could allow monotonous tasks and code management to be a headache of the past. Building off of simple groundwork already available can offer a completely customizable ally. Freeing up distracting roadblocks that slow you down so you can maintain your focus on what really matters when writing code.

Developers currently use AI in a number of notable ways in their day-to-day rituals. For developers who use the programming language Python, there’s already a massive library selection full of AI frameworks available to use to assist in mundane task and file management. Python is leading the conversation when it comes to AI and machine learning integration capabilities in programming languages because of the intuitive selections that can be easily implemented in only a few clicks. Outside of Python, other examples of how AI is already being used in code are voice-to-text plugins, text predication software to write code faster, and a growing Amazon machine learning service library made specifically for AWS.

Why the Human Touch Matters in Code

Freeing up any part of your daily workload is always a plus. Especially when dealing with complex code and intense deadlines. But the truth is, real products will always require real people behind them. Implementation of AI is a real benefit to your toolbox. But completely replacing the human behind the code can quickly become a recipe for failure. Intelligent algorithms and artificial intelligence are a puzzle piece that can achieve greatness when used correctly in code but will always be missing one key element – the human eye.

The rigorous testing that is required before shipping code requires a human to double check the AI’s work to make sure the passing checkmark it gave is completely accurate for what the main end goal was designed to achieve. The AI may mark the code good to go because it completed with zero errors. But an error free code doesn’t mean it’s fully correct. And the more intense the coding is, the higher the possibility of that becoming a reality. With code running in the background of a software, website, or product design that has multiple small complexities built into it, the human touch in the testing process before shipping is an absolute must to make sure that every intricate piece is correctly doing its job. A line of code that is errorless may still require small tweaks to perform exactly as intended.

Additionally, cross team collaborations where communication is essential works the very best with human-to-human interactions verbally, written, and present in the code. Strong documentation that is built out during the coding process allows for note taking that is easy to consume and take direction from. Human teamwork is also highlighted in crunch times when the code needs to be dissected or discussed in detail at a moment's notice without having to sort through the AI’s work that can cause precious time to pass as the clock is ticking.

Without the human touch directly involved in code, crucial steps in the process are replaced that are needed for the best outcome possible.

AI vs Human Coders Are Best Together

Looking at other industries and seeing how AI is responsible for replacing careers can be worrying for just about anyone in any role. Seeing the news headlines constantly come out with massive tech breakthroughs may cause excitement for many but could make others ask themselves if they may become the next job role to become extinct. Because coding is the heartbeat of technology, developers having dread on the subject of AI is easy to understand. But it should actually be the complete opposite.

Whenever AI and humans are combined to get a job done in code, it becomes a strong collaboration that makes the code better. Leaning into the amazing technological advancements AI and machine learning have to offer in the field can create a stronger developer behind the code using it in their toolbox. Having an AI companion working in the background as the developer focuses on the most important elements to the code is a way to work faster and smarter offering the same end results with confidence.

With the world consumed by technology and constantly yearning for the next exciting breakthrough, it makes complete sense why the predicted growth in developers is so much larger than roles in other industries. Developers are more important now than before in history as we depend so heavily on the technology around us to make our lives safer, easier, smarter, and better. That shows no signs of slowing down and with AI capable of playing such a large part in the process, creating the next wave of powerful tech has never been easier.

If you are ready to play a part in the future and better your life, devCodeCamp can help get you there. Our online coding bootcamp is designed from the ground up to give you the hirable skillsets you need to become a professional developer in as soon as 13-weeks. Our graduates are working in companies such as Amazon, Facebook. IBM, HubSpot, Deloitte, and much more. Reach out today if you would like more information on how we can transform your limited coding knowledge into a career.

Those of us who have been captivated by the movie-going experience since we were kids have always...

What Makes a Good Developer: A Comprehensive Breakdown

How to Overcome Programmer Block